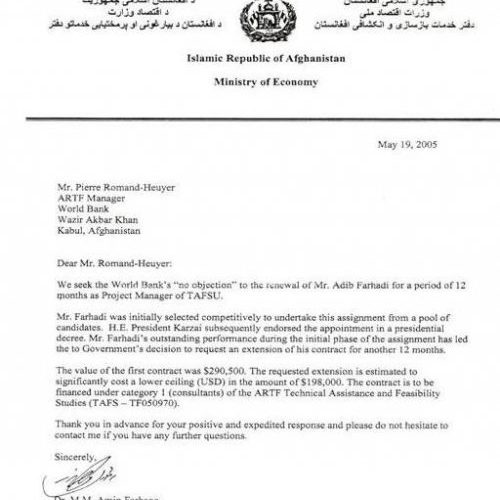 This article is based on a letter signed by Mohammad Amin Farhang, former Minister of the Economy and current Minister of Commerce to an official of the World Bank in Kabul showing Afghan economic advisor, Adib Farhadi, as director Interim Afghanistan National Development Strategy (I-ANDS) had received an annual salary of $290,500. This is $100,000 more than the U.S. Senate Majority Leader, and is an example of the huge payments made to certain well-connected, but dubiously qualified officials and consultants installed by NGOS and government organizations in Afghanistan. Funds come primarily from international financial organizations such as the World Bank and USAID.

In this document, the World Bank is requested to renew the contract of Mr. Farhadi for another year, but at a lower annual salary of $198,000.

The salary of an ordinary clerk in Afghanistan is 2,500 Afghani ($50), per month or $600 annually. Adib Farhadi’s salary is 484 times that amount. Recently, the government of Afghanistan agreed to increase the salary of government employees (but still not implemented, and many have not received the $50 salary for several months.)

It is shameful when the Minister of Economy of a country who should be sensitive and try to balance the salaries, requests an amount for one person that could support hundreds of working families of Afghanistan.

Adib Farhadi is not only paid by the World Bank but it is alleged that he receives additional compensations from other sources too.

Concerning the credentials of Mr. Farhadi, that would qualify him for such elevated positions and salaries, there are serious questions regarding the validity and suitability of his claimed degrees from Kabul University, East Carolina University in North Carolina, a PhD from “Virginia Theological University,” a non-accredited on-line organization with no advertised phone number, and a suspect “NYU/Columbia University/ Princeton University Consortium Degree.” There is information that he has received or is receiving a PhD from New York University, but records are unclear at this time. Farhadi has been a close associate of Mr. Barnett Rubin, of New York University, who is accepted by many in the media and U.S. government as one of the world’s leading experts on Afghanistan.

It has been reported that the American University in Washington, D.C. rejected Mr. Farhadi’s application to it’s law school, due to questions concerning the validity of his diploma and transcripts from Kabul University, even though his tuition would have been paid in full by USAID.

Appointing people for high economic positions is one of the apparent realities of an increasingly unpopular government in Afghanistan, with the possible collusion of international organizations such as the World Bank, USAID, and certain American institutions of higher education.

Additional cases of people like Minister Farooq Wardak, who occupy four key positions at the same time and receive several types of salary, are suspect. Apart from these salaries they have informal salaries that are received from the intelligence services of different countries or from the international civil NGOs who tolerate and enable Afghan authorities in this gross misappropriation of public wealth.

The anonymous source who provided this document to Kabul press has emphasized that salaries of people like Farooq Wardak, Dawoodzai, Hamyoon Hamid Zada and other members of Karzai’s administration are nearly the same as Adib Farhadi’s; not less than $290,000 per year.

Kabuli Children must play in the ruins, while consultants and government administrators are paid first-world level salaries.

Additional articles in Kabulpress.org will follow up on the activities, qualifications, and methodologies of excessive, unwarranted, and possibly illegal payments to individuals of funds meant for the urgent reconstruction and development of Afghanistan. Taxpayers around the world have been asked to send billions of dollars to Afghanistan. Who gets the money? We will tell you in this continuing series.